Good Idea #2: Dress as other holiday mascots on Halloween 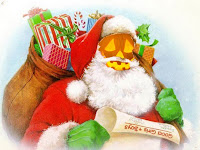 But you know what's even more awesome? Messing with people!

Now, on Halloween, there are very few ways that a person can effectively do that. People already are dressing up in very un-normal ways. So that's to be expected. People go from house to house knocking on people's doors and ringing door bells. So that's to be expected too. There are lame ways to mess with people, like toilet papering their house, or throwing eggs at them. But they're also really old hat.

Why not publicly celebrate a different holiday on the wrong day?
More specifically, dress up as the mascot for another holiday!

Next Halloween, try dressing up as Santa Claus, and get a big bag, and fill it with presents (the good kind, you're Santa Claus, remember?). Go door to door, as is normal on Halloween, but instead of saying, "trick or treat!" instead bellow: "MEEEEERRRRRRY CHRISTMAS!!!!" and hand the person at the door a gift. Then wish them a happy new year and walk away.

Alternatively, you could dress up as the Easter Bunny, and hand them colorful plastic eggs filled with candy, and wish them a "Happy Easter!" in your best rabbit-voice.*

Even though wacky behaviour is allowed on Halloween, people still won't quite know how to react. But they WILL probably think it's hilarious, and it will most likely brighten their day.

And that's why this is such a Good Idea.

*[Editors note: Easter and Christmas are the only two widely known holiday mascots I can think of, as most other holidays haven't been so atrociously commercialized as these two and focus more on spirituality than mascots. If you can think of another non-halloween holiday mascot, by all means, dress up as them, stay in character, and celebrate that holiday on the wrong day.]
Posted by The Punk Patriot at 6:51 PM